Do you like my new garden? Ok, I wish! However this magnificent garden has excited and inspired me. 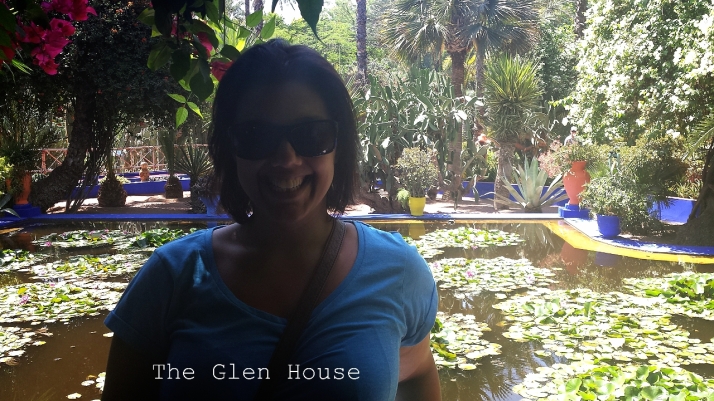 The Jardin Majorelle in Marrakech was designed and built by French painter Jacques Majorelle. It took forty years of passion and dedication to create this enchanting place in the heart of the “Ochre City”.

It remained a private garden until designer Yves Saint Laurent gifted the Jardin Majorelle to Marrakesh, the city that had adopted him in 1964. Saint Laurent and his partner Pierre Bergé bought the electric-blue villa and its garden to preserve the vision of its original owner, landscape painter Jacques Majorelle, and keep it open to the public. Thanks to Marrakshi ethnobotanist Abderrazak Benchaâbane, the garden Majorelle began cultivating in 1924 is now a psychedelic desert mirage of 300 plant species from five continents.

The planting was incredible; cacti, yuccas, water lilies, coconut trees, banana tree palms, and bamboo have been brought in from all over the world to sit alongside vivid flowers.

The special shade of bold cobalt blue which he used extensively in the garden and its buildings is named after him, bleu Majorelle—Majorelle Blue. The blue painted walls and pool edges give the garden a cohesive cooling feel. 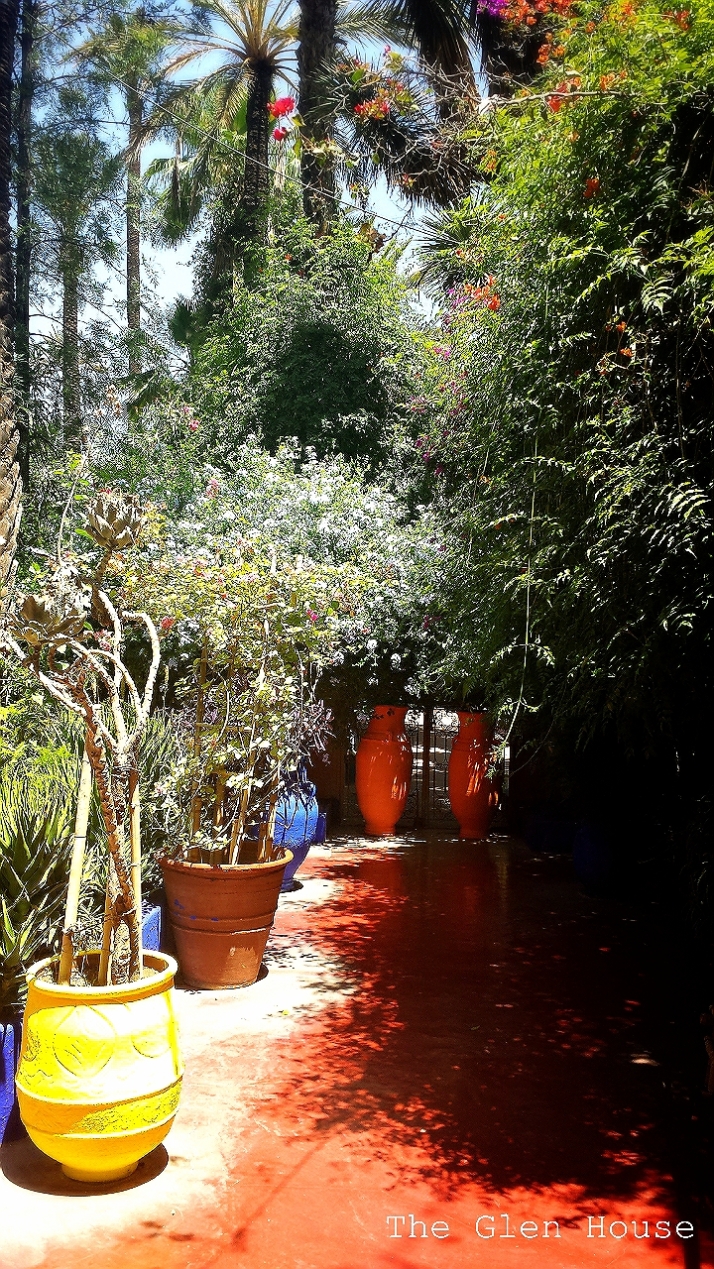 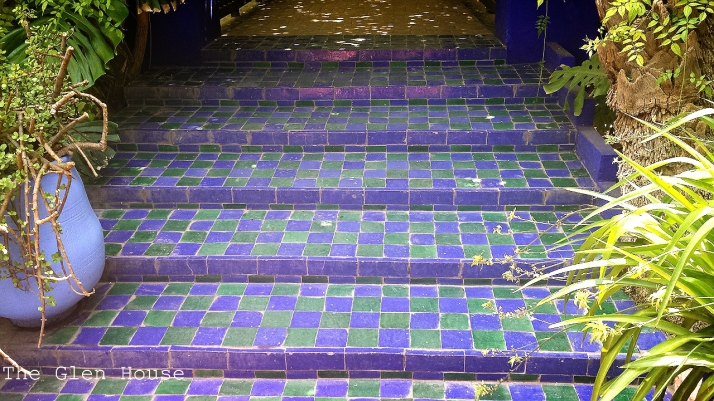 It is these vivid colours that give the garden it’s signature character. Their brilliant hues set off the various shades of green and blue in the plants.  The ground is mulched with a pink crushed stone that is native to the area and is the predominant colour of buildings in Marrakesh.

Time has slipped by, and June has disappeared without a trace. However,  it started with a trip to magical Marrakesh.

Like many Moroccan cities, Marrakesh comprises an old fortified city packed with vendors and their stalls (the medina), bordered by modern neighborhoods. Today, the Medina is a UNESCO world heritage site. Founded in 1070–72 by the Almoravids, Marrakesh remained a political, economic and cultural centre for a long period. Later architectural jewels include the Bandiâ Palace, the Ben Youssef Madrasa, the Saadian Tombs, several great residences and Place Jamaâ El Fna, a veritable open-air theatre. 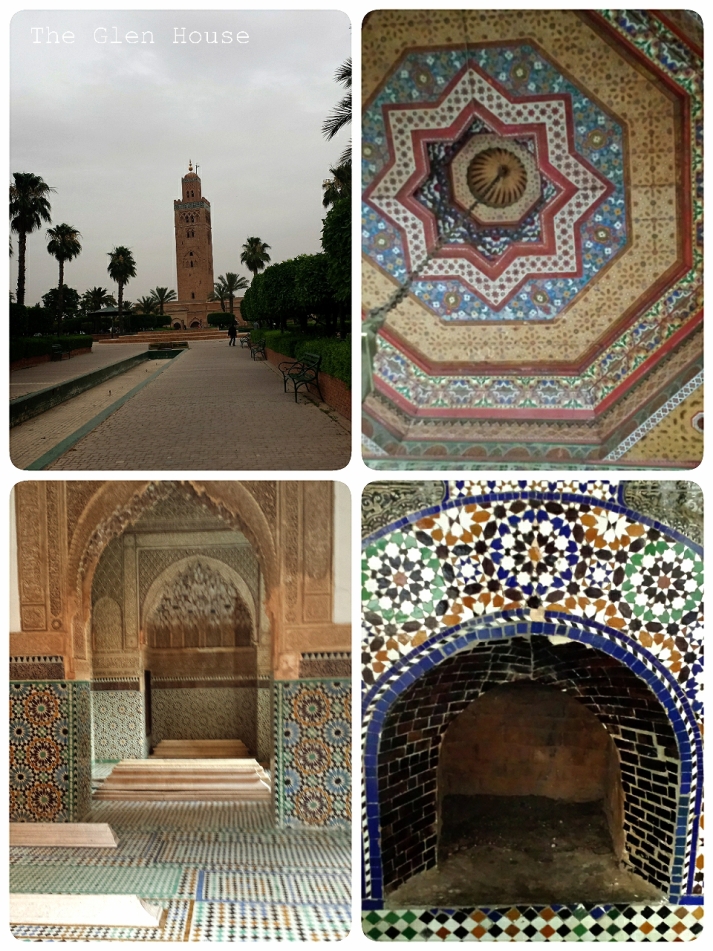 The alley ways of the Medina were full to the brim of treasures…. We might have brought one or two of these home….

By night, the Place Jamaâ El Fna square became a hive of activity. It was packed with food stalls, story tellers, snake charmers and people going about their business.

We took a day trip away from the crazy, busy noises of the city up the Atlas Mountains. As we climbed and climbed the mountain side, the terraine took my breath away. We passed Berber villages cut into the mountain side. On such a stunning, hot day, it was hard to imagine the peaks of the mountain being covered in snow during the winter.

I couldn’t get over that such dry, dusty land turned into lush, green landscape so quickly.

No trip anywhere would be complete without some delicious food. Morocco is famous for tasty tagines and our trip didn’t disappoint.

We had lamb tagine with sticky onion and prunes- it was incredible! We ate chicken and preserved lemon tangine, which was nestled beneath vegetables. There was couscous studded with chickpeas, sultanas and more of those sticky caramelised onions.

The dishes below were served to us on our trip deep into the Atlas mountains. We had an beautifully presented salad, finely cut up and served with fresh bread. Our main was a traditional Berber tagine, which contained chicken, potatoes and root vegetables.

On reading my new favourite cookery book Tagines, I think the chicken tagines above were made something like this:

Pour the olive oil into the base of a tagine. Arrange the onion rings across the bottom and scatter the chopped onion and garlic on top. Arrange the meat, bone-side down, in a mound in the center of the tagine. (The taller the mound, the more conical your arrangement of vegetables will be.)

Combine the spices in a small bowl. Sprinkle a little less than half of the seasoning over the meat and onions.

Arrange the bell pepper strips in the center and top with the parsley bouquet and then the jalapeno pepper, Garnish the tagine with the preserved lemon quarters.

Add 2 1/2 cups water to the empty bowl and swirl to rinse the residual spices. Add the water to the tagine, cover, and place the tagine on a stove top over medium-low heat.

Leave the tagine to reach a simmer. (This may take a long time, 20 minutes or so; be cautious in feeling the need to increase the heat.) Once simmering, continue cooking the tagine over medium-low heat until the meat and vegetables are very tender and the sauce is reduced.

While the tagine is cooking, you may check the level of the liquids occasionally and add a little water as necessary, but otherwise try not disturb the tagine. Do stay alert for the smell of anything burning, and lower the heat if necessary to avoid scorching ingredients and/or cracking the tagine. (It is normal, however, for some of the base onions to burn and adhere to the bottom of the tagine as they caramelize and reduce.)

Remove the cooked tagine from the heat and serve. It will stay warm while covered for 30 minutes. 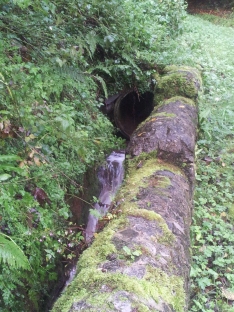 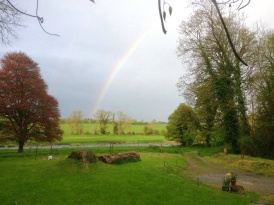 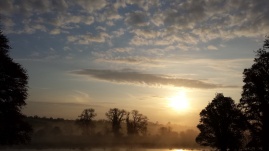